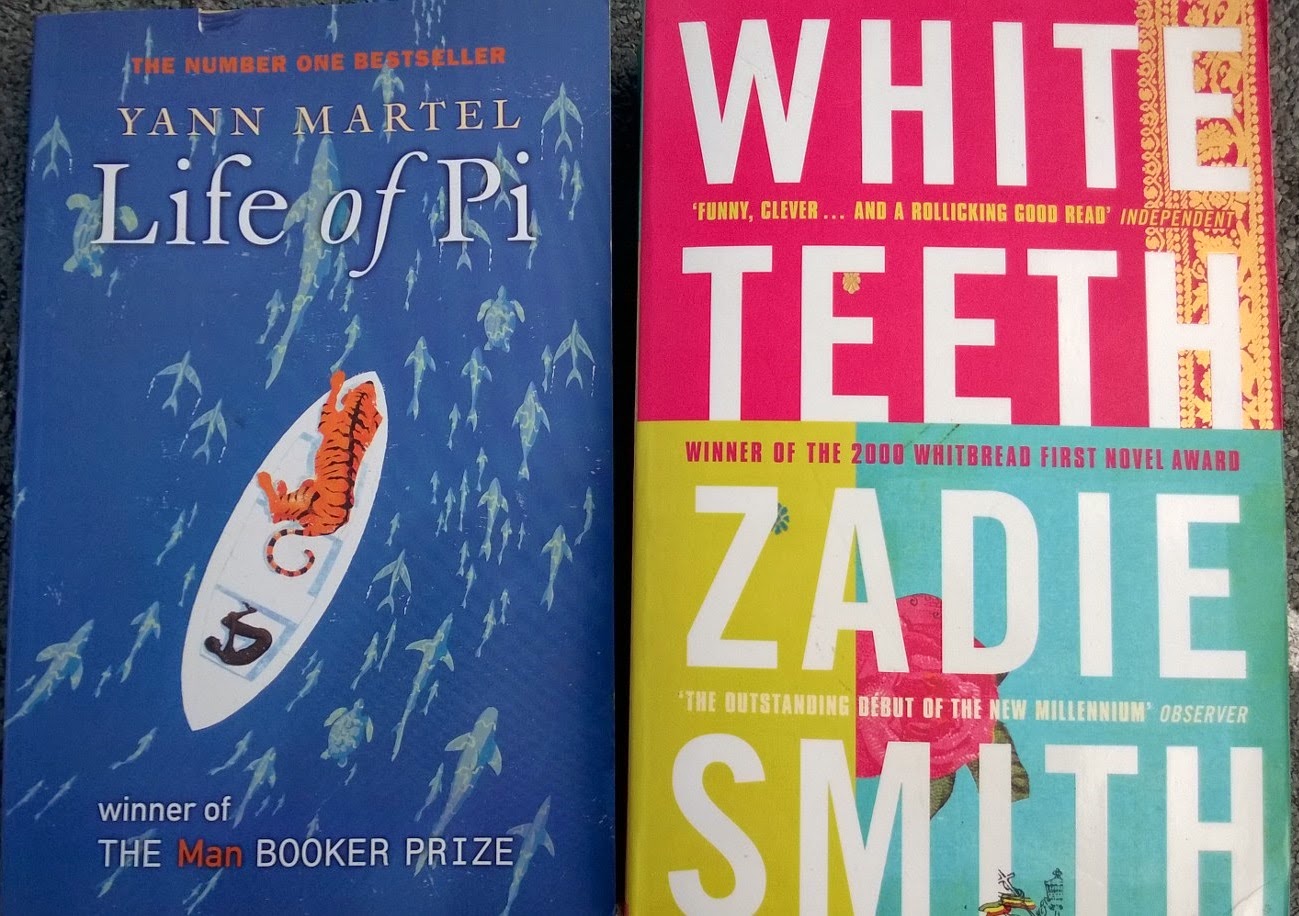 Having featured the late Gabriel Garcia Marquez in our last post, we thought maybe we'd highlight a couple of other award winners currently stashed away in the Little Library, waiting for the right person to come looking for them... it's all good stuff, so if you haven't checked out our selection yet you really should do :-)

First up is Yann Martel's "Life of Pi", the wonderfully quirky novel about a boy and a tiger, cast adrift in a boat together, which won the Man Booker Prize for fiction in 2002 (and various other awards, not so well known in the UK, too!).

Keeping it company is the witty and incisive "White Teeth" by Zadie Smith - the story of 2 wartime friends in later life which won the 2000 Whitbread Award for a first novel; the Guardian First Book Award, and several others.

Just some of the wonderful writing available for free to you in our Little Library! 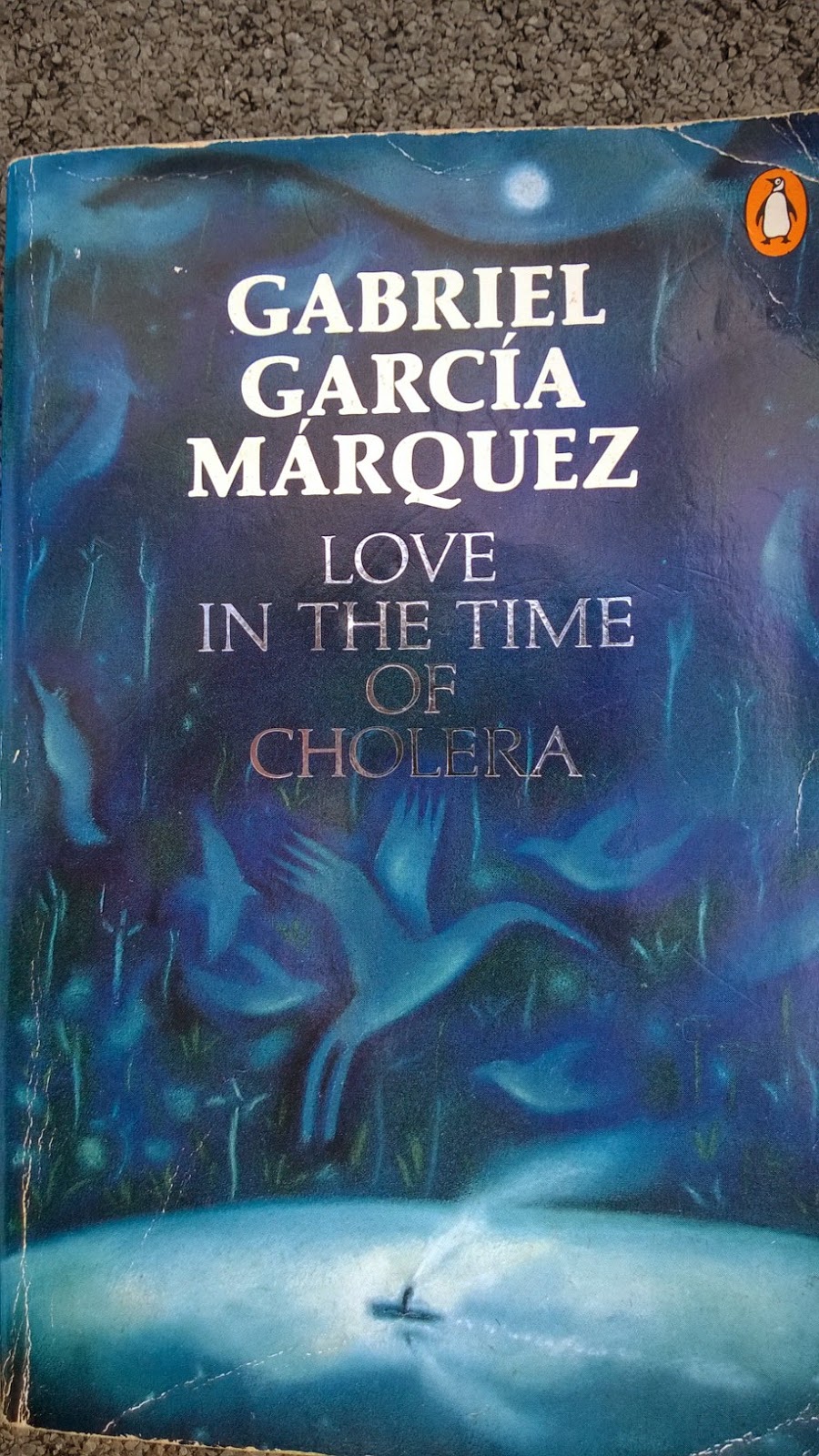 Last week brought the sad news that Colombian writer Gabriel Garcia Marquez has died - though, to be brutally frank, many people probably responded to that news by wondering just exactly who he was and what all the fuss was about...

We pride ourselves in trying to offer a wide range of books in the Little Library, despite the unavoidable fact that it is, well, 'little'... and, tucked away in there at this very moment, that includes books by a number of Nobel-prize (for Literature!) winning authors... one of whom is Gabriel Garcia Marquez.

So - if you're wondering what all the fuss was about (and you get there before someone else finds it), why not check out 'Love in the Time of Cholera' - it's a very human tale of love, written with as much compassion - and rather more humour - than the title suggests :-)

In the words of Newsweek: "A love story of astonishing power and delicious comedy"

And, in the words of one Amazon reviewer: "A calm, poetic journey through the tortures and joys of love that is almost a life-affirming experience, even for the most hardened cynic"

We started the Little Library because we love books; we love reading; and we love to share that with our community. That means we are massive fans (and users) of 'real' libraries - big, proper, full-on libraries like the one on Allerton Rd. The Little Library is intended as a gesture of friendship towards our neighbours - it is not, nor could it ever be, intended as any sort of replacement for a proper library.
Due to cuts in Government funding Liverpool City Council is considering plans to close up to 10 of the 19 libraries in the city - we oppose closing any libraries, not just the one on Allerton Rd. Libraries are a necessity, not a luxury!

Please complete the Council's consultation questionnaire (there are also paper copies in the library, if you'd prefer) to let them know how important you think our libraries are - we realise that tough decisions are being forced on them by Government cuts, but severing a critical source of information and education - especially for the least advantaged in society - is surely not the right way to go!

Please also find out more about the Friends of Allerton Library and give them your support.
Posted by Andy P at 10:13 No comments:

Pursue Happiness with the Little Library! 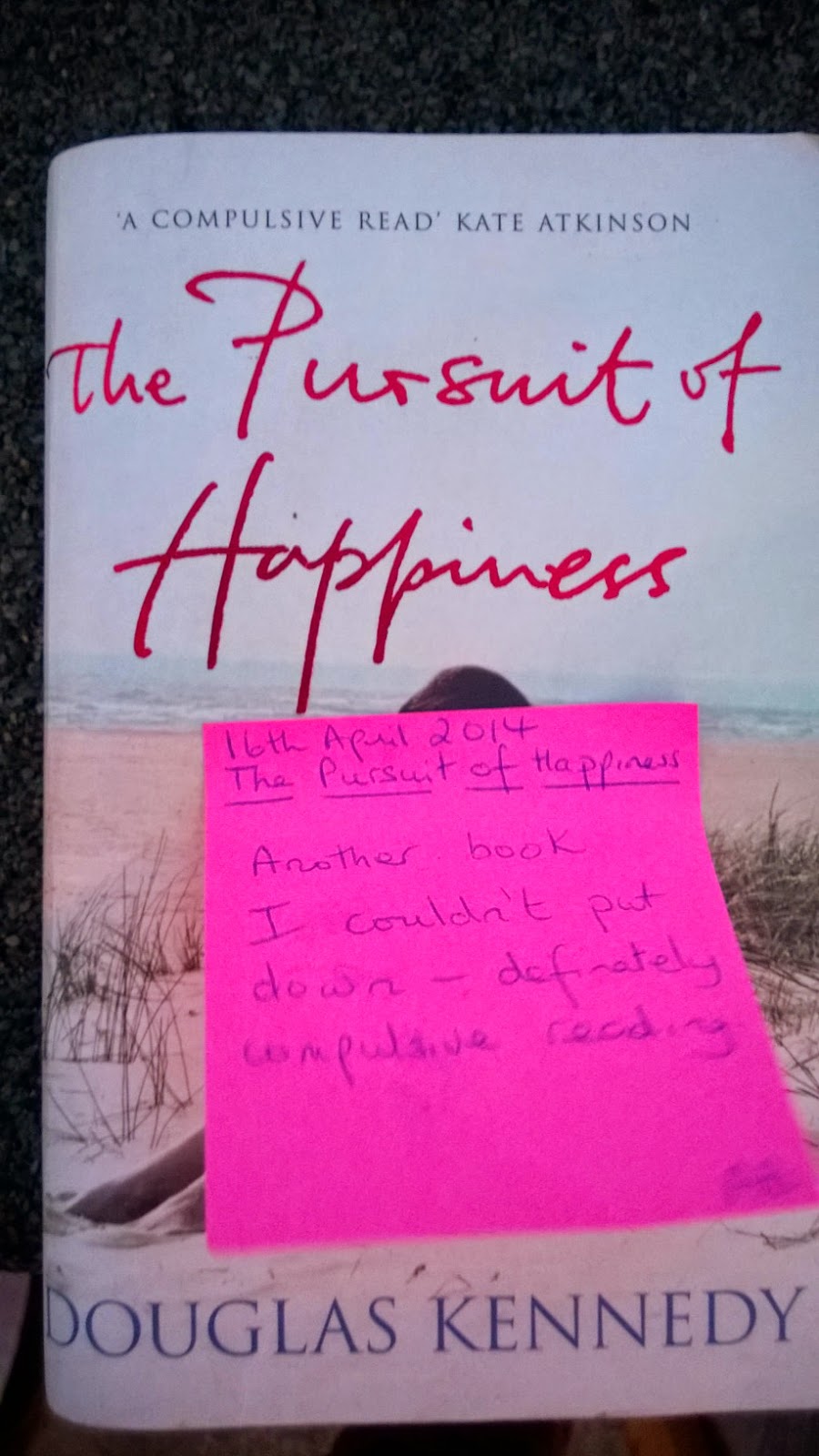 Our old (still unknown) friend 'AB' has been at it again - leaving one of those notes we love so much on a book... with another strong recommendation for a book in the Little Library. And it seems AB is not alone in loving this book, judging by the great reviews it's got...

"The critically acclaimed bestseller from the number one bestselling author of The Moment and A Special Relationship. A powerful romantic novel set in the tumultuous world of post-war America.

New York, 1945 - Sara Smythe, a young, beautiful and intelligent woman, ready to make her own way in the big city, attends her brother's Thanksgiving Eve party. As the party gets into full swing, in walks Jack Malone, a US Army journalist back from a defeated Germany and a man unlike any Sara has ever met before - one who is destined to change Sara's future forever.
But finding love isn't the same as finding happiness - as Sara and Jack soon find out. In post-war America chance meetings aren't always as they seem, and people's choices can often have profound repercussions. Sara and Jack find they are subject to forces beyond their control and that their destinies are formed by more than just circumstance. In this world of intrigue and emotional conflict, Sara must fight to survive - against Jack, as much as for him.
In this mesmerising tale of longing and betrayal, The Pursuit of Happiness is a great tragic love story; a tale of divided loyalties, decisive moral choices, and the random workings of destiny."

There are loads of great reads packed into the Little Library - so come on and get one!
Posted by Andy P at 14:10 No comments: 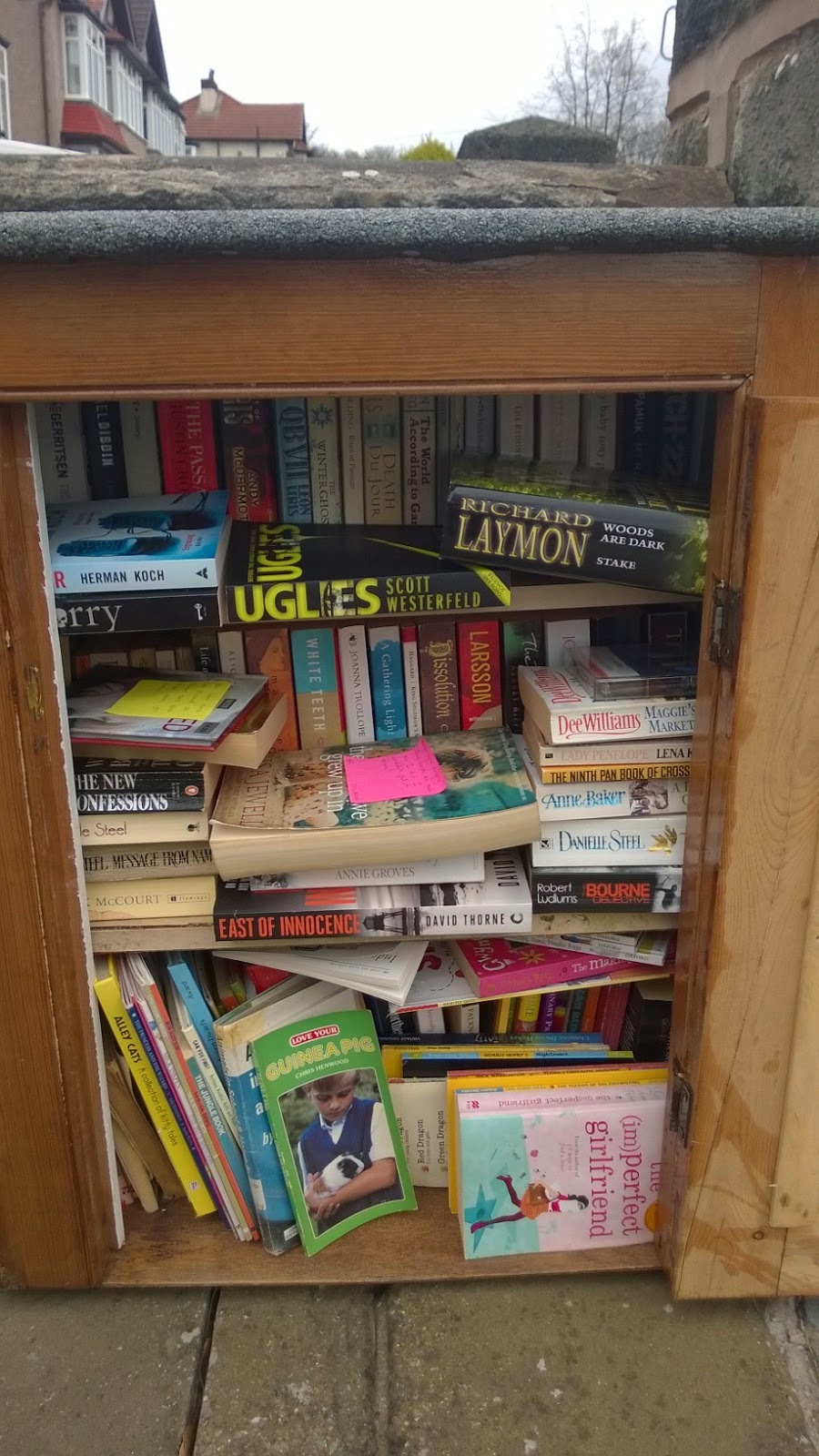 People have been leaving notes in the Little Library :-)

Our old friend 'AB' left a note recommending a book she really enjoyed, which is a great way to let other people know what you thought.

And some other very kind persons left a note for us - with a book that they thought we might like based on the 'Dogs Trust' sticker in our car... they were absolutely right! We love dogs and we loved the book - thank you so much, whoever you are! x

We've decided we love notes so much that we've added a pen and some stickies to the library to make it really easy for anybody to leave one - so please do! 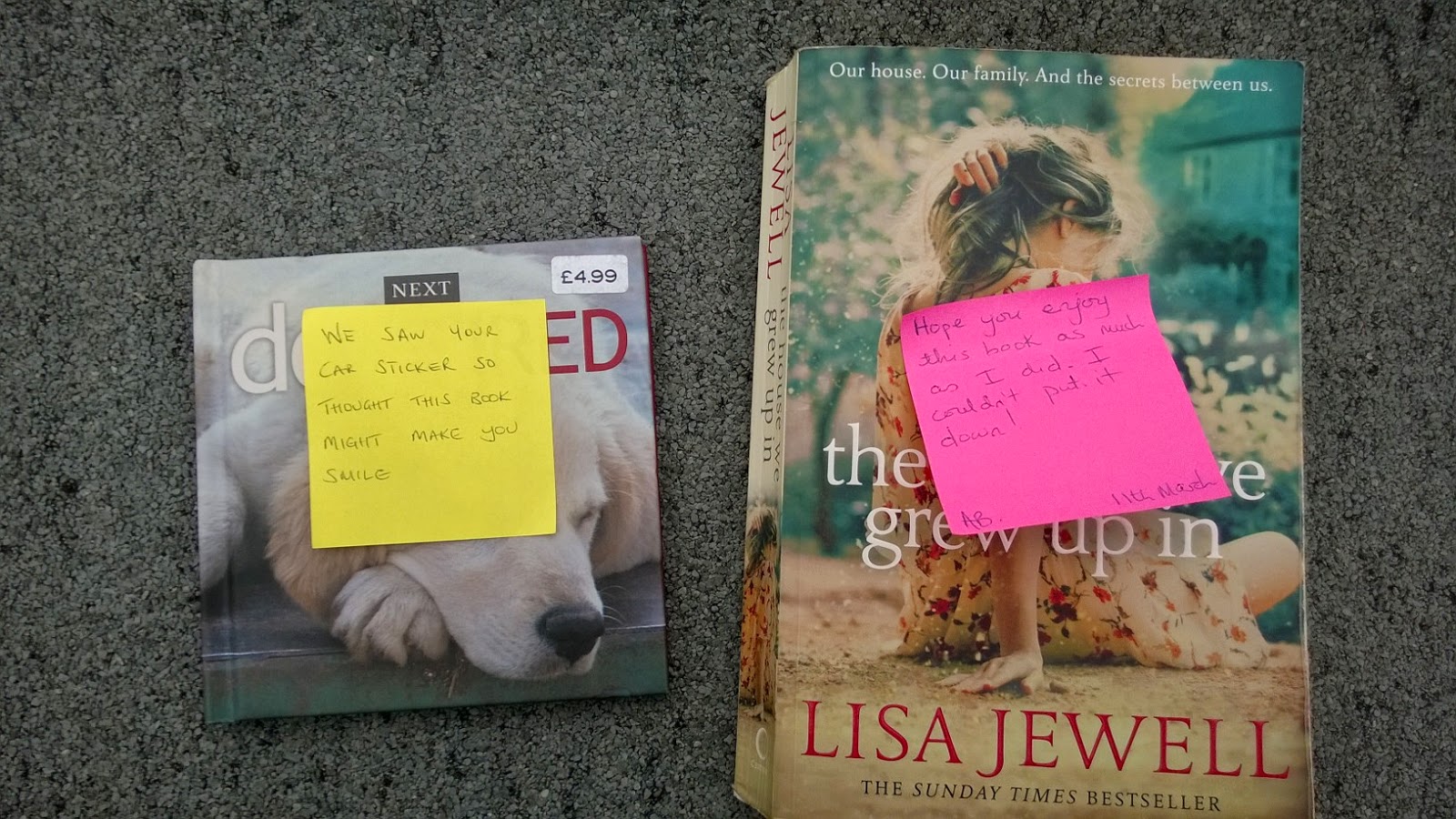 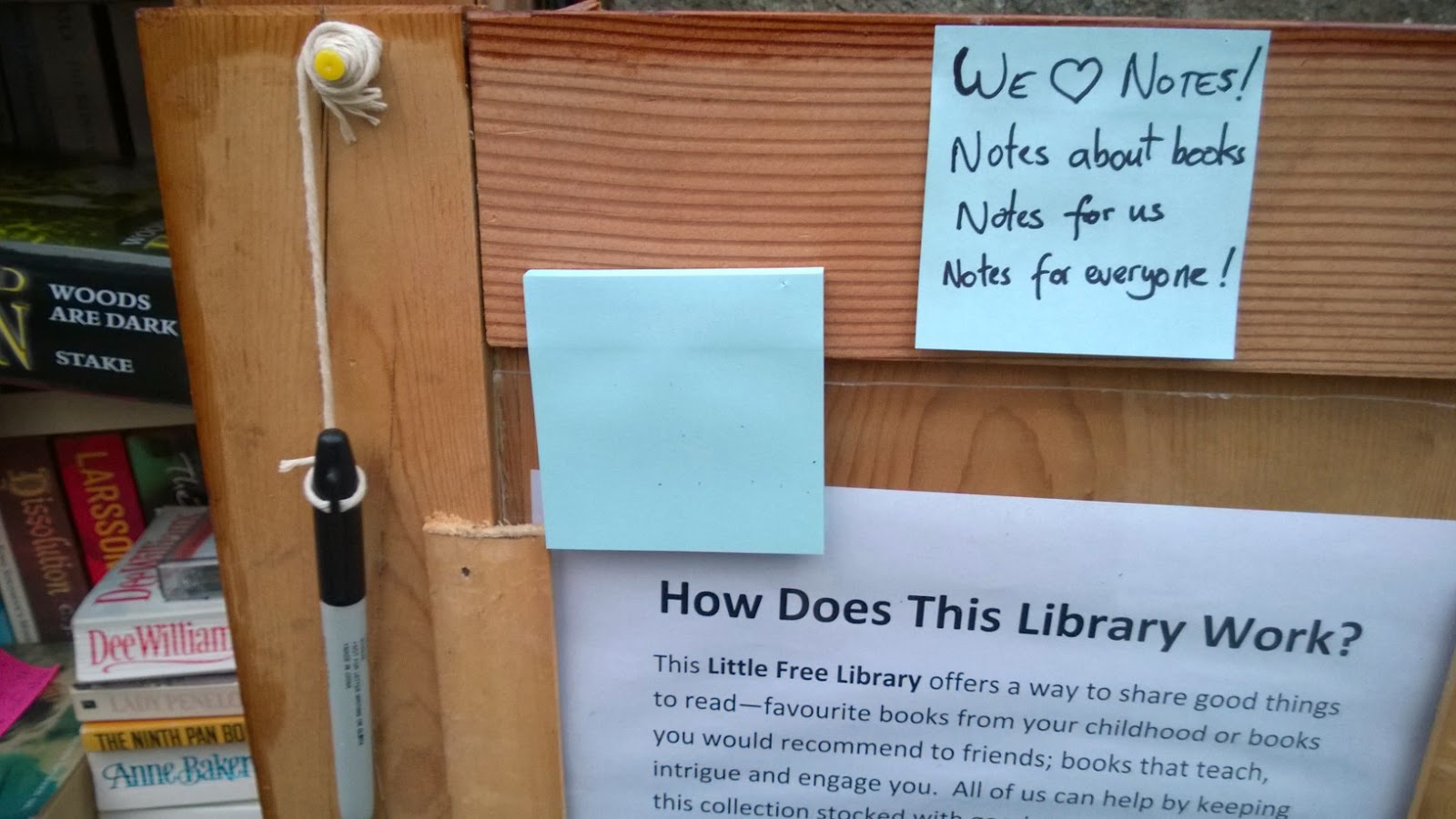 It seems we were wrong about our first appearance on Twitter...

Whilst it was wonderful to feature in tweets from The Reader Org, it seems that they weren't the first! Unbeknownst to us, our old friend and all-round top fella Syd Cottle had already tweeted about us, and even let Penguin Books know about us :-) I'm sure that truck full of books will be pulling up outside any day now...

A friend & his daughter have set up a 'Little Library' at their house in #Liverpool. Read all about it: http://t.co/GFOzsavZLt #inspired
— Syd (@EstatesPro) March 16, 2014

As they promised, our friends at The Reader Org have been publicising us through their twitter account @thereaderorg - how exciting :-)


Our groups at @CaldiesMansion got a visit from the brilliant Little Library Liverpool last week http://t.co/YcMYWN5run
— The Reader Org (@thereaderorg) April 9, 2014


We love the idea of a neighbourhood #library swapping books - and it's so close to @CaldiesMansion too! http://t.co/YcMYWN5run #reading
— The Reader Org (@thereaderorg) April 9, 2014

Visiting the Reader Org in Calderstones 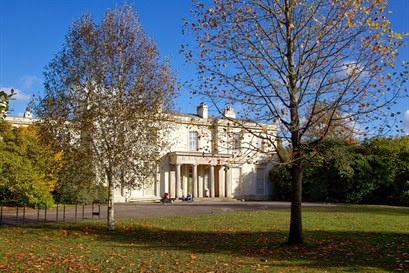 On Monday we went to meet with the lovely Siobhan Mealey from the Reader Org, who now have the Mansion House in Calderstones Park. They are doing lots of exciting things in the area; across Merseyside; and beyond - all aimed at encouraging people to read... which - as you know - just happens to be one of our favourite things as well :-)

We told her all about our Little Library and she was very supportive - we're looking forward to finding some ways we can work together in future and, in the meantime, please do check out all the events they are running in Calderstones and pop into the newly revamped cafe!
Posted by Andy P at 13:04 1 comment: